The Beau Peep Colour Collection was published in June 1987, and Roger and Andrew went on a promotional book-signing tour (which the Daily Star called the “Beau Peep Party”), around various Pontins Holiday Parks in the UK. Vouchers were printed in the Star which allowed free-of-charge access to the Party, and the rest of Pontins, for the day. Readers were invited to dress up as their favourite Beau Peep character for a fancy dress competition, to be judged by Andrew and Roger (well, just as soon as the bar had shut). The prize was an original piece of artwork from the new book.

As well as the chance to meet Roger and Andrew, and to get your new book signed, there were giveaways of Beau Peep T-Shirts, hats, aprons, postcards, balloons and stickers. Some venues even has a guest Starbird (as the Daily Star topless models were called then).

"The Daily Star had decided to organise a series of 'Beau Peep Days' at Pontin's camps throughout the country. Andrew and I had to turn up at these holiday stalags and sign autographs while wishing the earth would swallow us up." 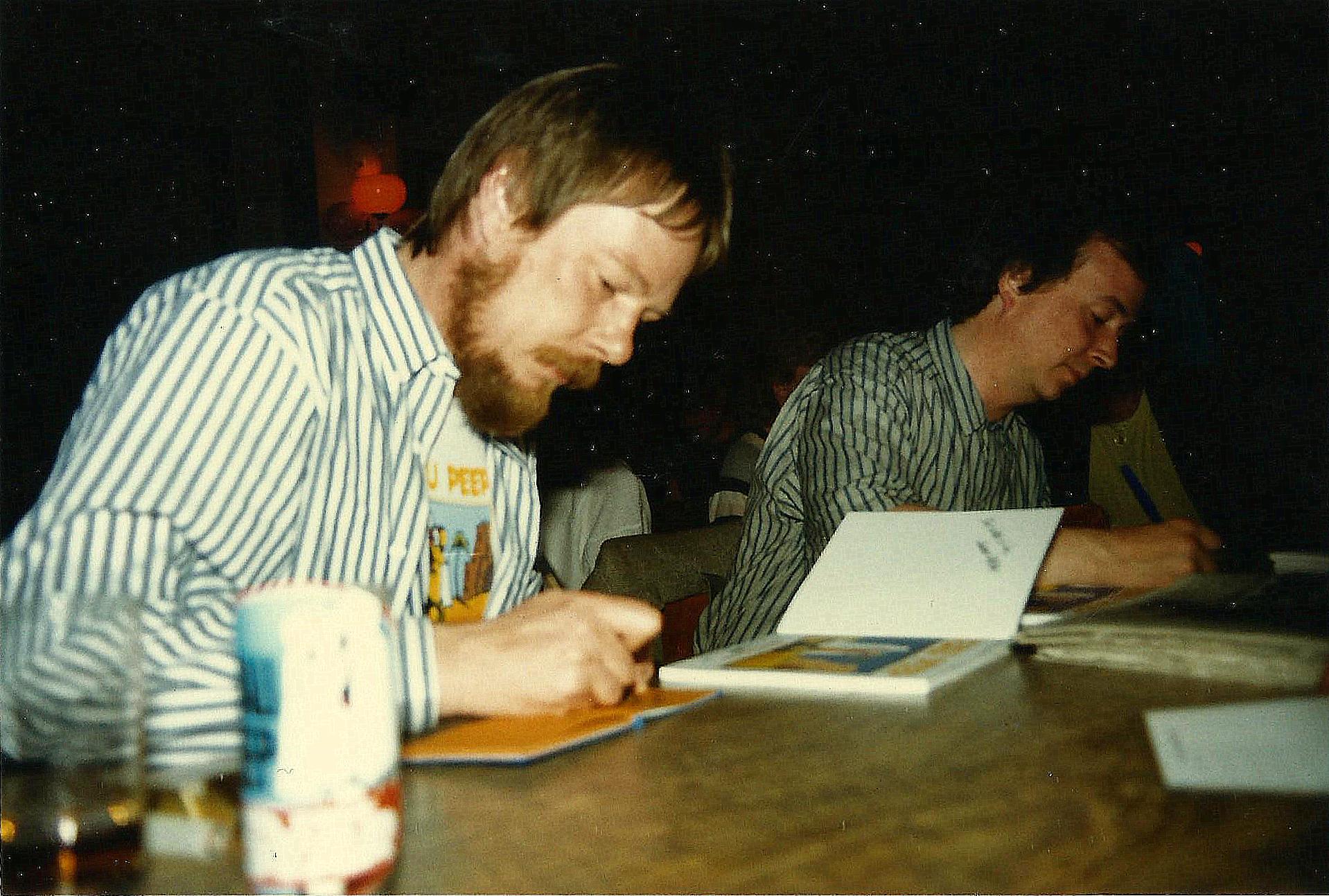 Another prize draw could be entered by writing your name and address onto the Beau Peep strip from that day’s paper and dropping into the hat. The first prize was a week’s full-board holiday for four people at a Pontins Holiday Park of your choice.
Second prize was a fortnight.

The first “Beau Peep Party” took place at Brean Sands, near Burnham-on-Sea, Somerset, at 12 noon on Thursday 18th June, 1987. A (somewhat exaggerated) report ran in the next day’s Daily Star:

An army of Desert Pratts marched across the burning sands of Burnham-on-Sea yesterday.

Hundreds of Beau Peep fans invaded the Pontins holiday centre there to take part in The Stars fancy dress contest based on the nations favourite cartoon strip! There were Dennis’s by the dozen, Beaus by the bucketful - and even Sopwith the Camel.

The two original legionnaires were due to arrive in person via the Orient Express - but Dennis had booked an Indian meal in downtown Tobruk.

So, instead, the strip’s creators, Roger Kettle and Andrew Christine, were on hand to cast an expert eye over the desert thong.

And they also took the opportunity to launch the latest book to celebrate the exploits of their heroes, The Beau Peep Colour Collection.

The first prize went to Key Shannon and Robert Christoph of Farnborough, Hants, who got together and came as Sopwith. But they soon got the hump when youngsters demanded a ride.

A medal of distinction was awarded to Bill Ballard who entered the competition as Egon the Chef. It was a magnificent effort that lacked only flies for complete authenticity.

Everyone voted the party a tremendous success. Meanwhile somewhere in Tobruk, two intrepid legionnaires were eating a chicken tikka...... 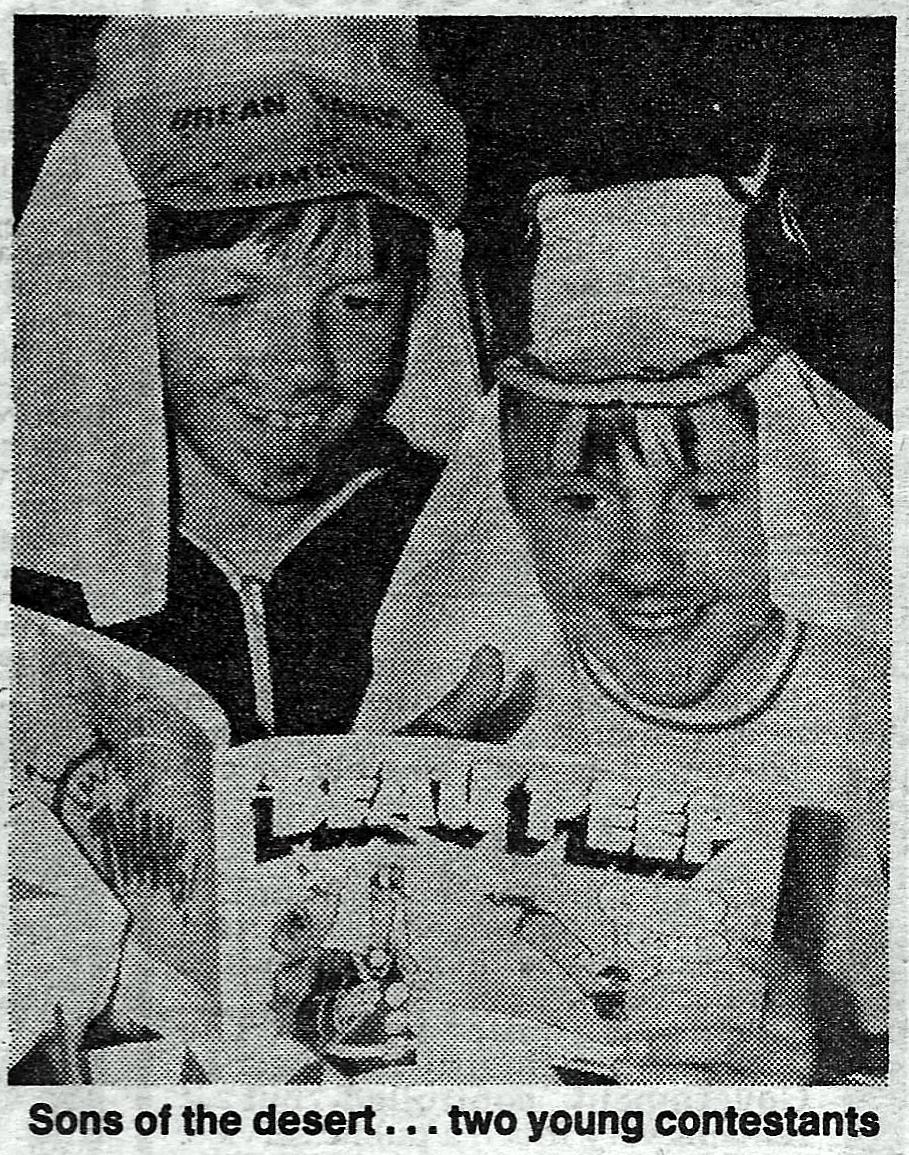 Three other Beau Peep Parties were held at:

A report of the Great Yarmouth event ran in the Star the next day: 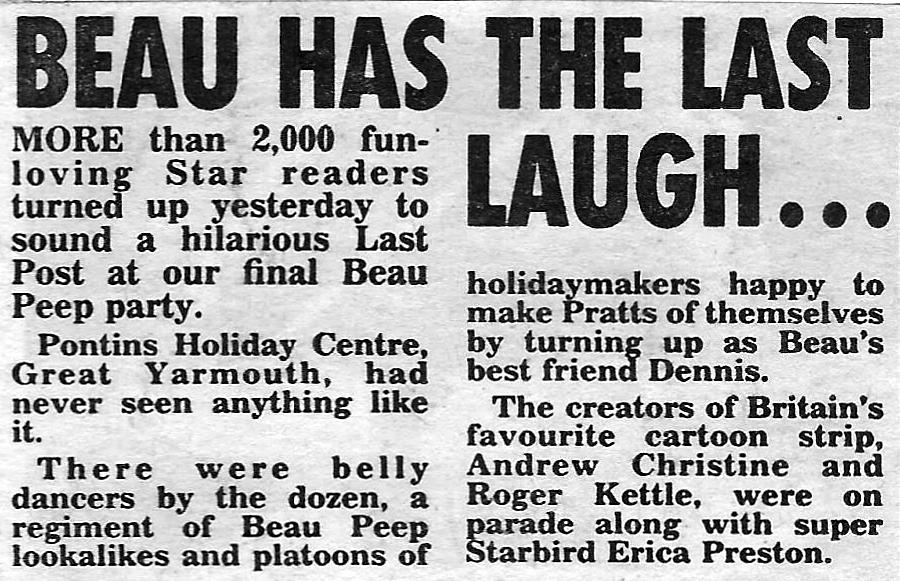 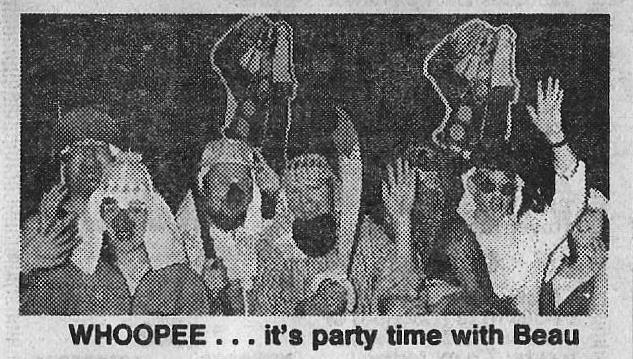 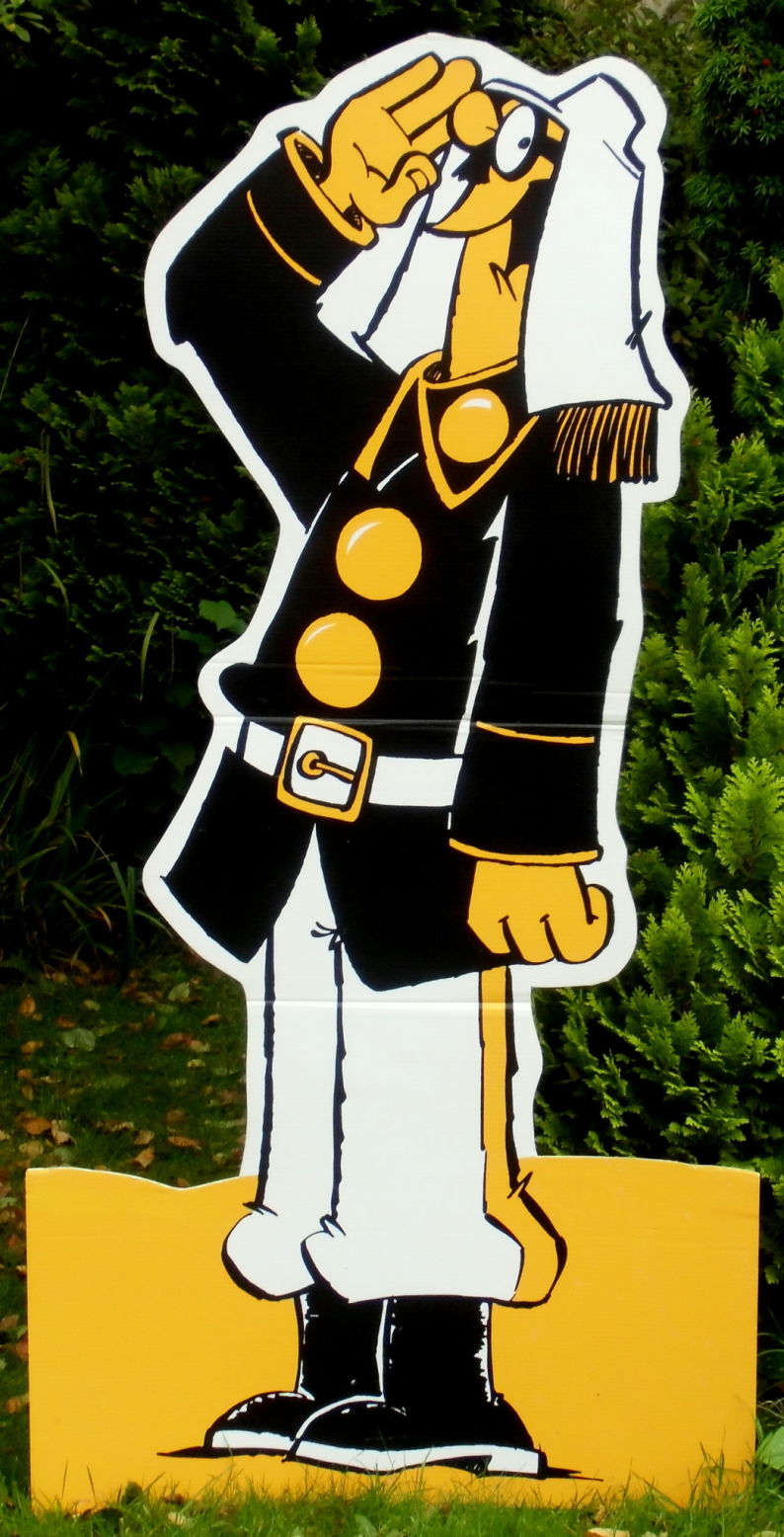 A 6-foot tall Beau Peep standee, made from corrugated plastic, and one of many that were seen at the Peep Parties. This one, somehow, managed to escape from Stalag Luft 17 and was spotted by our photographer wandering around a garden in Somerset....... 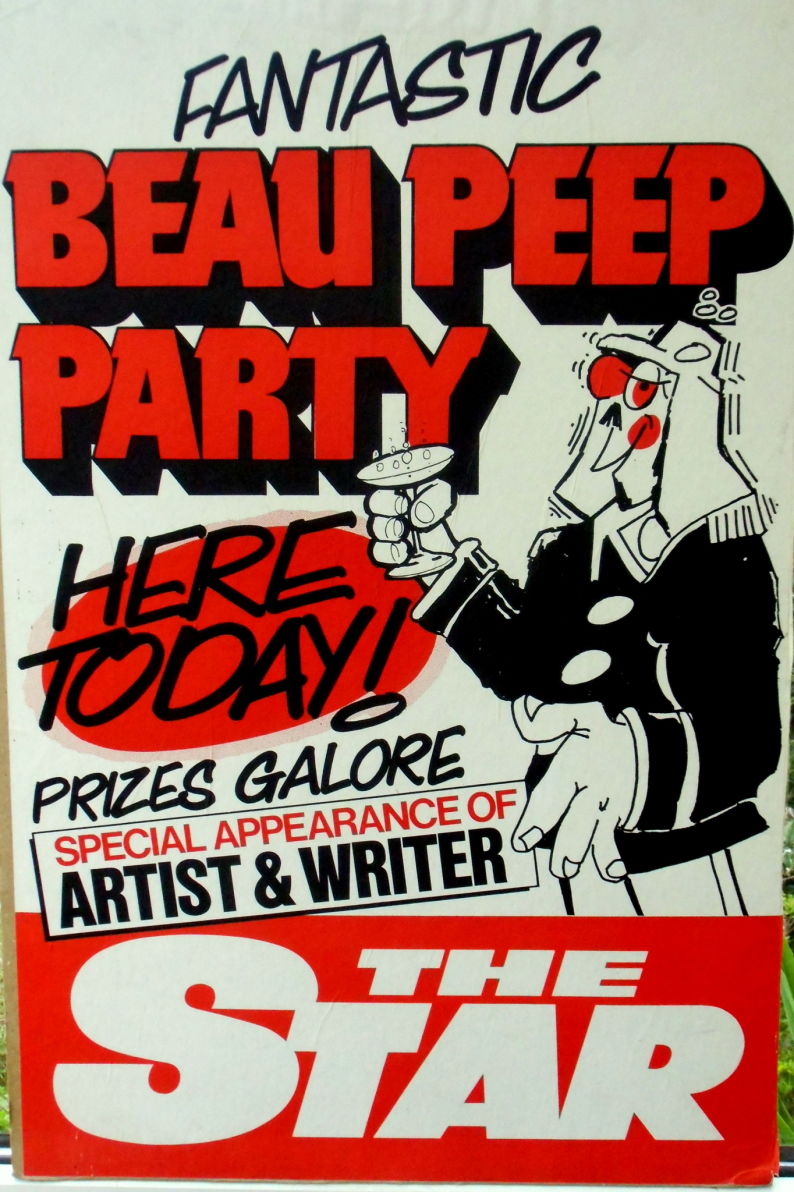 One of the newspaper billboards seen outside the Pontins Beau Peep Party sites. The rather unusual portrayal of Beau is almost certainly not Andrew Christine's work. 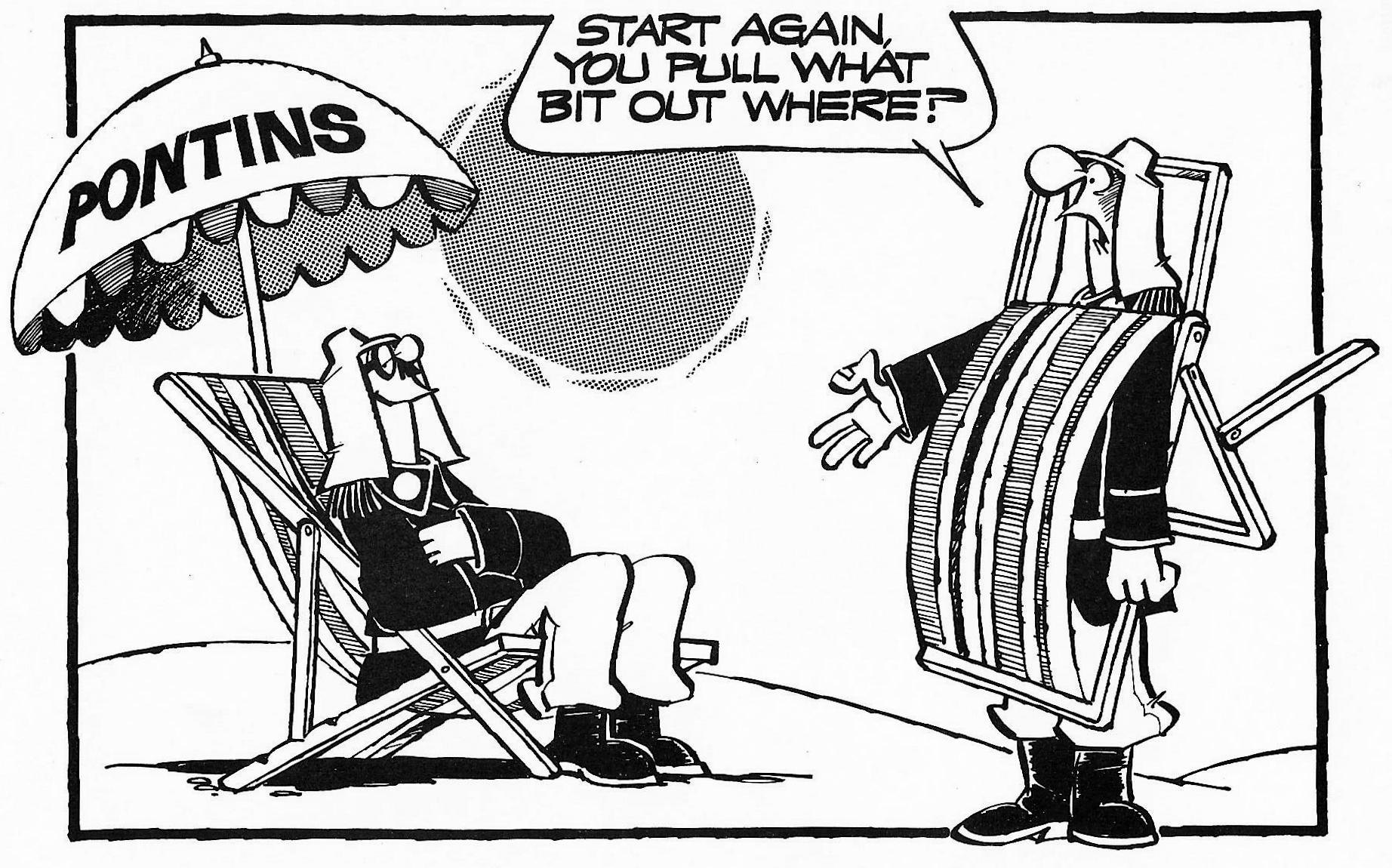 A postcard issued by the Daily Star to promote the events.