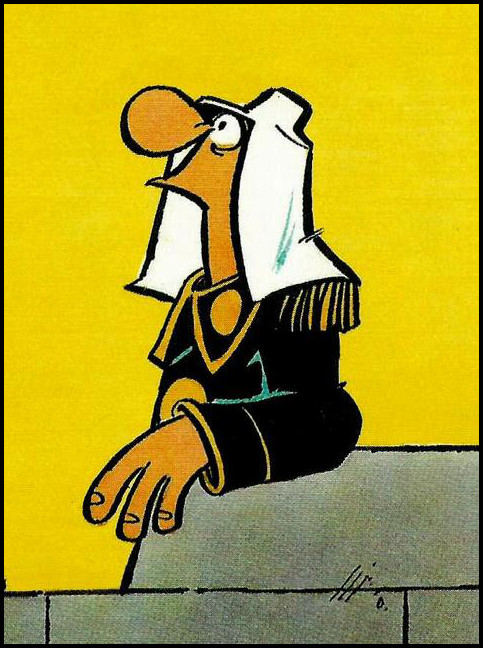 Dennis is so hopeless he even makes Beau look good. Incompetent is a mild way of describing this lad. His IQ is expressed in negative figures. He not only cannot fire a rifle, he isn’t sure which is the dangerous end. And he thinks amnesia is rice pudding.

Actually it’s probably not his fault he’s stupid – he’s blame it on heredity, if he knew what the word meant. His mum is just as daft as he is, and forever sending him useful presents to help him in the desert – like woolly scarves and ear-muffs. Well perhaps he is a bit more stupid than his mum – he wears them.

Only recently did he learn the rudiments of reading, though he still can't tell the time.

He is gullible -- it's only because of him that the businesses of Honest Abdul and the local pet shop are both flourishing. Not so as much the pubs though -- when it's his round he suddenly discovers he has very short arms and very deep pockets. <<< strip

Roger was asked a couple of questions on the Beau Peep Forum:
Okay, in which order did you think up the characters?

"Oh, Lord, I spent about half an hour answering this, making all sorts of philosophical points. Then I pressed the wrong key and it all disappeared.
I...um...thought the characters up alphabetically."

So Dennis came before Beau Peep. Why didn't you call the strip Dennis?

"Dennis's second name is Pratt! Many years ago, this caused a problem when Quentin Crisp got upset about "The Dennis Pratt" award -- something The Daily Star dished out for outstanding stupidity. Dennis Pratt is Quentin Crisp's real name.

Dennis is one of triplets

A brother , Hector, <<show pic who is equally dim and visits the fort occasionally, and a sister, Mavis (who hasn’t been seen) - 548

Mum – 1870 Their mother has visited Dennis at the Fort a few times.

His Dad apparently is a bit of a rogue. Dennis: One night my dad said to me ‘look son, the moon shines just for us’. Beau: Sniff! That’s beautiful Dennis. What else did he say? Dennis: Quick, it’s gone behind a cloud…pass me that jemmy. <<<check quote ..... Jemmy strip 26-09-81 – Saturday special Karate expert – 679

Letter in the Daily Mirror in December 1999: I was surprised not to see the name Dennis in the top 50 names for boys in 1999 (The Mirror, Dec 22).
This is an ancient name from the Latin Dionysius, the Greek god of wine and revelry. Dennis is also the name of the patron saint of France, and was introduced into Britain in the 12th Century. I just wanted to speak up for us Dens! Dennis Gadd Tottenham, N.London