One of the most significant and popular supporting characters of the strip.
Known only as The Nomad, this short-arsed, long-nosed individual lives alone behind a rock in the desert. 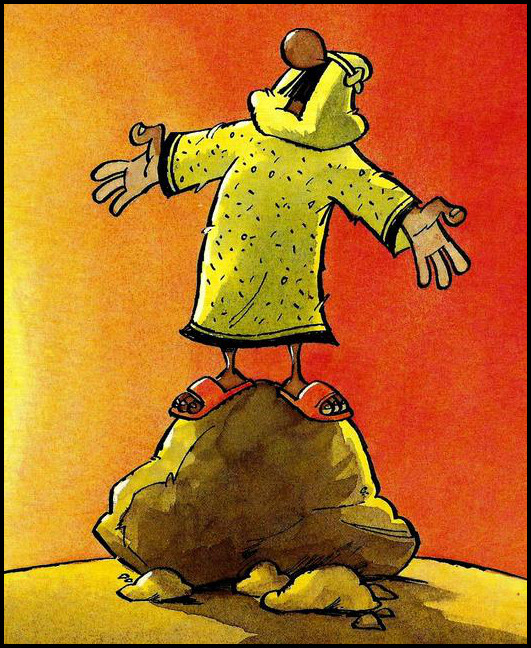 Born the 7th son of a 7th son at 7.07am on the 7th day of the 7th month (on a 77 bus), he was exiled from his Tuareg tribe for 'nicking' (pilfering). He won’t be allowed back unless he presents them with the head of an enemy warrior -- and his target: Beau Peep. For many years he attempted this, but his incompetence (more so than due to Beau’s ingenuity) got the better of him.

In 2007 Roger commented about the Nomad becoming less bloodthirsty:

"After the Gulf Wars and 9/11, it became a little insensitive to show an Arabic character running around threatening to "slaughter everyone in the fort". Okay, he's a North African nomad and hopelessly inept at everything he does but it was no longer a comical image. These days, I focus on other areas of The Nomad's lunacy like his book-writing and business ventures."

Occasionally he’ll still try to take over the fort, as his alter ego ‘The Desert Shadow’ (“or Des, for short”). But forgetting his ladder, forgetting his hay-fever pills, or forgetting he doesn’t have an air force usually puts paid to it.

These days he primarily concentrates on his writing projects: He harbours an unshakable belief that he is a best-selling author waiting to be discovered. His quest for fame began with his autobiography ‘Sand in My Y-Fronts’. This was rejected by the publisher, as were the sequels - Sand in My Y-Fronts 11, 111, 1V, V, V1 and V11.

He unsuccessfully branched into the arts with 'Sand in my Y-fronts: The Musical', 'Sand in My Y-Front: The Rock and Roll Years', and 'The King and I both have Sand in our Y-Fronts'. His venture into children’s literature with ‘Sand in My Nappies’ also, not unsurprisingly, flopped.

He’s a keen golfer (he calls himself Tiger Nomad) and wrote “a classic tale of sex and golf -- Lady Chatterley's Putter.”

He’s even stood for MP (his slogan: "Vote for Me or I Set Dogs on You"). Manifesto: “ If I get elected, I promise to give you all a million pounds -- no point piddling around with 2p of a pint of beer.”

A bit of an entrepreneur, he’s tried his hand at being a banker, estate agent, tour guide, lawyer, publican, stand-up comedian, and disc jockey (when he entertains the bar with his vast selection of hit gramophone records, including ‘How Much is that Doggy in the Window’, and ‘Train Sounds Volume 3’.

The Nomad is a loveable loser.

The Nomad's first appearance in 1979

He has a brother:

As well as his Auntie Ethel, he's also referred to others:
"Abdul the Destroyer...Achmed the Terrible...all my ancestors were great warriors. Well, apart from Colin the Accountant".