In 1990, the Daily Star carried some adverts for a set of Beau Peep Glasses, plus a Tankard.

“Something to delight the legion of Beau Peep fans is this smashing engraved glass Tankard together with 6 engraved glasses. No rubbish here. The Tankard, which holds a pint, is Italian glass and cleverly and carefully hand-engraved with the rascal - Beau Peep - himself.

The six ‘tot’ spirit glasses are made from Italian Blown Crystal and each one is engraved - by hand, of course - with the characters familiar to Beau and his fans. There’s The Vulture, Beau (again), The Nomad, Egon, with his flies, Dennis and Mad Pierre.

The work that has gone into the glasses and the tankard really makes them something special. And the nice thing about them is that although they deserve pride of place in a display cabinet, you can use them.

You’ll not see these in every shop in the High Street and we’re offering them, because Beau and his long-suffering associates are so special to our readers, at an exceptionally low price. The set of 6 glasses and tankard is £29.50. The tankard alone is £11.99 and the six glasses are £22.50. All prices include delivery charges. Everything is sent out in strong, specially designed packages, ideal if you want to give them as presents."

They were available to buy by mail order from The Trophy Shop of Harefield, Middlesex. 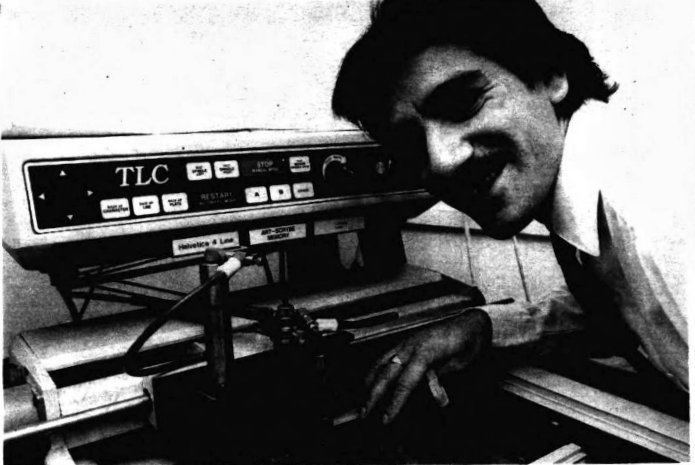 The Trophy Shop owner Charles Webb at his engraving machine.

In February 1991 'The Harefield Gazette' reported that: "Some months ago, Charles approached a national newspaper with his idea to create a selection of glasses depicting the paper's cartoon characters. To date, 3,500 sets of glasses featuring The Daily Star's Beau Peep had been sent from Harefield to all corners of the British Isles."

"I remember meeting the guy who ran that company---he was convinced the idea was a winner. The glasses were of good quality but were too expensive for the target customers. Sadly, as I recall, very few sets of glasses were sold, although I've still got mine!"